Imagine you film with shallow depth of field but still want to track precisely the background, for example to put something blurry in it (perhaps something scary or just a light?). The problem is that tracking requires sharp corners which do not exist when shooting with shallow DOF.

The way I have tackled the problem is to shine a diffused laser light in the scene. This diffused laser light creates a certain pattern which is called "Speckles". The amazing feature of this pattern is that it is always in focus. People like me who wear glasses can see the difference instantly by taking off their glasses and then the only sharp aspect left will be the speckle pattern. The bottomline is: if you light your background with laser light then you will have a fine structure which can be tracked!

I did two experiments with Adobe Aftereffects where I tracked a blurry background lit by tungsten... 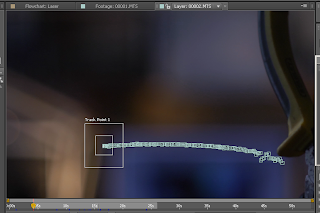 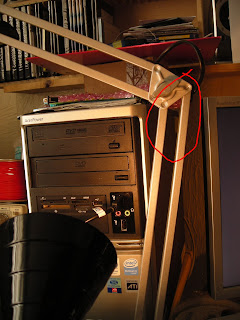 and one background lit by a green laser speckle: 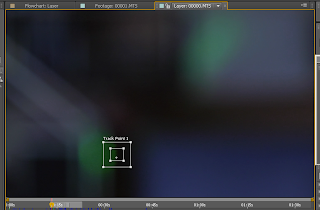 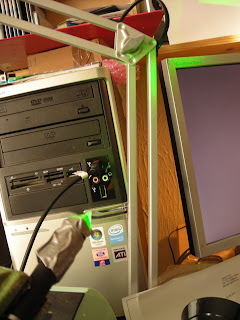 The laser is just a standard green laser pointer which I put in a vice, added a diffuser and an ND gel to adjust the exposure. Here are the results (I blurred the text a bit to have the impression of a neon sign in the background, well, sort of!):

Tracking of a blurry edge lit with a tungsten source

It can clearly be seen that tracking of the edge is much more precise using the speckle pattern. I made it for the laser tracking even more difficult by having a search window which has no chance to track the y direction precisely (see aperture problem). The camera was an AF100 at its highest bitrate and the lens was a Canon 50mm f/1.4 focused on the tool in the foreground. I had to add an ND filter to make the speckle pattern as faint as possible because H264 (as MPEG2) preserves more detail in the lesser exposed areas. The AF100 has a pretty nasty H264 compression which removes quite a lot of the speckle pattern but it still provides enough structure within the green area to improve the tracking.

Conclusion: lighting the background of a scene which is out of focus with a diffused laser makes tracking much more precise.