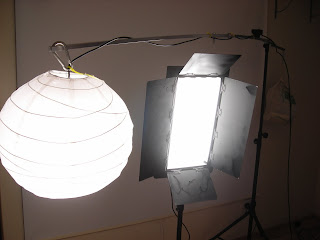 For many this means: Fluorescent lighting = "Kinoflo". Problem is that Kinoflo = $$$$$$$.
However, there are much cheaper alternatives available which use the same bulbs. Here are two examples. The light in the middle is a fluorescent photo light widely available on e-bay and also from other outlets. In Germany there are two companies which make reasonably priced fluorescent lights: Walimex and "Fotowerkstatt Mainz". There are also a couple of Chinese manufacturers on ebay. All in all there is not much in these lights except a transformer and that's it. These lights use special striplights from Osram which have a very high colour rendering index of over 90% and daylight balanced colour temperature (Dulux 954 55W tube). The quality of the light is exactly that of daylight and can be mixed with it. It looks very natural and soft. It's time for a lighting example: 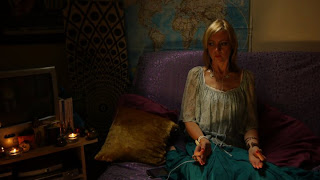 Here, a small two-tube fluorescent light (2x55W) was placed underneath the candles the left. The second light source was an overhead fluorescent light fitted with a paper lantern and covered by a black bin-bag at the back to avoid light spill on the wall.
The light inside of the paper lantern is a fluorescent bulb produced in China and has a CRI of over 90%. It's 125W which is about the same light output as one redhead (without the heat of course!). Here is one shop on ebay which sells it but it's widely available now. 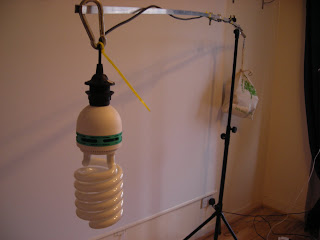 The bulb is also available in 150W. Important is that you buy the bulb with an actual power rating of 150W. It's basically a pretty large energy saving bulb with a special coating to achieve the CRI of over 90%. The boom arm is made of aluminium and I've mounted the plug directly on the aluminium with a earth connection to the aluminium. The counterweight is a bag filled with old books. I prefer books because in case the bag bursts it won't cause any damage to the floor. The stand is an Adam Hall loudspeaker stand which is very lightweight and is 3m tall. My second stand is a standard disco lighting stand where I have attached an aluminium arm. Same idea but a bit heavier.
Here is a test film using this overhead light as the only light source. Improvised by Tommy J Brennan and Shanta Roberts. The film WEBCAM CONNECTION uses the overhead light in the two first two scenes. In the first scene it's above Tommy and in the second scene it fakes the ceiling light.
Posted by Bernd Porr at 15:52 6 comments: 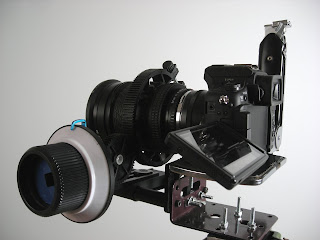 After weeks of experimenting with different follow focus systems I've settled for this one.
The problem with cheap follow focus systems is backlash. With most of them the backlash is so large that it's impossible to do precise focussing. The main reason for the backlash is the 90 degree gear between the white knob and the lens gear. The follow focus system I have found uses a worm gear which has virtually no backlash at all.
The follow focus can be obtained from ebay, for example here. There is also a nice review on YouTube (thanks, Alan). However, the gears coming with this follow focus are pretty horrible because they are very hard to tighten. Better are the gears which are shown in the picture and are also widely available on e-bay.
In terms of the rod support: I have modified the rail system to allow hand camera operation. For this purpose I bought a flash adapter for a medium format camera. It has a nice large mounting plate, a large grip and it is very easy to attach it to the camera. I could have screwed the quick release plate directly on the flash adapter but that was not very stable so I used a bracket from B&Q and added a standard camera thread. All in all a weekend of plumbing. Bottomline: having a good rod support system saves loads of time. A warning: don't buy the Indian rod support systems. They are pretty horrendous and you need to buy expensive extras to have a complete system.
The lens I'm using on the camera is a 28-70mm f/2.8 Olympus OM with m4/3 adapter. For shallower depth of field I have a Canon FD f/1.4 with m4/3 adapter. For wide angle shots I'm using a Samyang 14mm F/2.8 EOS with m4/3 adapter. Because of the adapters you can buy all these high quality FD/OM/... lenses which are much more robust than the plasticky Panasonic lenses and they are just mechanical with no electronic parts. These lenses also cost a fraction of the auto focus lenses. This gives also a very long battery lifetime for the GH1 of about 4 hours.
Films made with this camera setup: 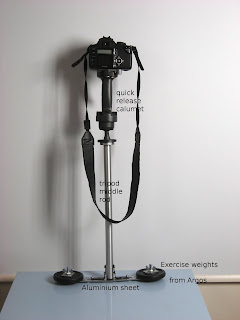 For a shoot (where I was running backwards through the woods) I made a simple steadicam which works very well.
A steadicam is basically a pendulum which adds inertia to the camera movement. It's suspended directly underneath the camera, here just with my hand and arm. The two exercise weights at the bottom add the inertia. The longer the boom and the heavier the weights the smoother is the movement. Because the DSLR is pretty light the weights at the bottom need not to be that heavy to pull the camera in a vertical position. What is trickier is the rotational movement of the camera which is prevented by having two weights sideways on a metal bar. Ideally, the rotation could be even more dampened by a soft suspension. It's not that optimal to hold the pendulum directly with your hands. It would have been better to have a handle sideways but I never managed to build that. As long as the camera is held pretty loose in your hand also the rotational movement is pretty smooth.
I use 1kg of exercise weights but could add a second set (after more time in the gym!). These are from a set of exercise weights I got from Argos. The aluminium sheet at the bottom and the screws are from B&Q. The tripod was just a cheap still camera tripod which conveniently had this quick release mechanism attached to it which lies quite nicely on my hand and acts as a bearing: 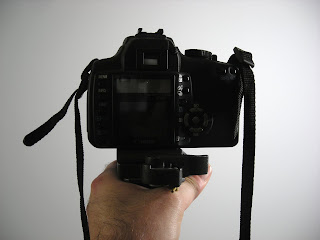 How to merge MPEG4 with AC3 audio

Sony Vegas 11 has an annoying bug, namely that the Sony AVC encoder won't export audio. Solution: render out AVC without audio and then render out a separate AC3 audio file and merge them using MP4Box.
That's it. And it's even streamable for flash.
Update: this bug only shows up if the audio rate is higher than 192kbit/sec.
Posted by Bernd Porr at 12:04 No comments: