I bought off a hackable GH-1 off ebay and optimised its firmware with the well known "ptool3".

Here is my configuration file for ptool3 which I called "setd.ini". Just copy this file in the same directory as the ptool and select profile D.

With GOP=5 the camera generates an intra frame every 5 frames instead of every 25 frames. The other important numbers are Video Bitrate FHD/SH=40000000 and Overall Bitrate=41000000. It seems to be important that both numbers are pretty high but that the overall bitrate must be a bit smaller.

The actual bitrate is much smaller as the number suggests in the config file. Here is a highly complex scene with loads of movement -- taken from the play "The Red Dress" which premieres at the Edinburgh Fringe 2011: 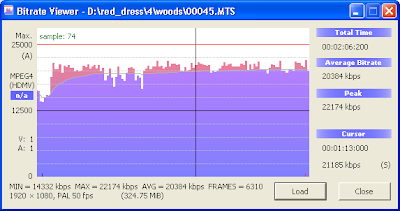 The bitrate averages at 22Mbps which is well above the 17Mbps of the original setting. Higher bitrates show occasionally up but only in high contrast clips (shooting having tree branches against the sky) but rarely go above 30Mbps.
I record on SDHC 10 cards with 18MB/s writing speed.
Posted by Bernd Porr at 22:01