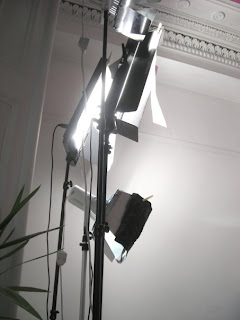 What are the alternatives? There are quite lot. The only problem is that most other sources have CRI of <100%. For filming a CRI of 90% or higher is required.
The oldest alternative are the so called HMI lights which have roughly 90% CRI. These are gas discharge lights. In the old days these were really just the HMI lights but now you have a large range of discharge lamps with a CRI of well over 90%. They are often called metal halide lamps, for example, the Osram Powerstar D. See my post about HMI style lights. Lights of this type are often used in fashion shops because they need to reproduce colour faithfully.
Three phosphor fluorescent striplights also have a colour rendering index of over 90%. People associate them usually with Kino flos. However, many companies make them now -- and much cheaper. For example, Fotowerkstatt Mainz or Walimex. All fluorescent lights use basically the Osram Dulux 954 55W tube. The rest is just a box with barn doors.
On the left there are fluorescent lights from the Fotowerkstatt with the Osram Dulux tubes in it, mixed with HMIs to create a sunny daytime atmosphere. Here for the film BIG BOOTS. When you watch the film, the lights are on the right of the window which was covered with ND filters to reduce the incoming light by 2 stops. The room was basically lit by the fluorescent lights and the HMI while the ND reduced the incoming light so that the windows won't burn out.
The colour rendering index of both light sources is above 90%. The colour temperatures are actually slightly different but add a bit of texture to it. 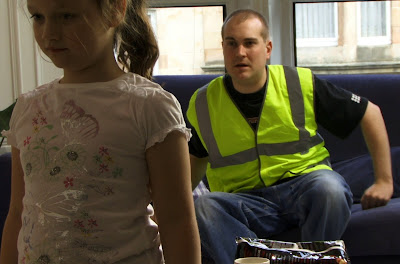 Much worse are LED lights. They have often a colour rendering of less than 80%. This is because they have strong blue component which is not very flattering on faces. I've used LED lights in documentary making but I wouldn't use it in fiction, certainly not on faces. It is well known from theatre that blue light brings out blood vessles and makes faces look ugly. Actors will hate them.